On June 11, 2019, Young Invincibles celebrated its 10-Year anniversary in Washington, D.C. at the Pearl Street Warehouse. Jimmieka Mills, a YI advocate, shared her story and YI’s impact in her life. The text of her remarks are below.

In 2009 while YI was being formed by five law students in a school cafeteria I was celebrating the fact that I’d finally been awarded the Pell grant that I desperately needed in order to begin my first semester in community college. 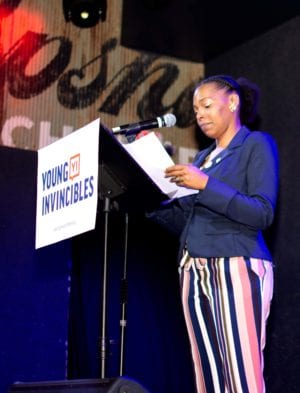 For two years leading up to that point, I’d made it my duty to go to every financial aid counter at every campus of Houston Community College to inquire about the Pell Grant and if the “Rules” had changed or were somehow different from campus to campus.

I had no idea what policy was and how it had the power to shape and in my case, disenfranchise. The limits within the Pell Grant were clear — unless I was: 24, married or a parent I would need my own parents’ information in order to even qualify to be awarded the funds I would need.

So, in 2009 at 5 months pregnant one of those “rules” would be my silver lining— I qualified for aid because of my pregnancy and was going to attend college.

I would be starting my first semester of community college at 21 years old as a pregnant non-traditional student who had gone without health care for two years. The impending birth of my son guaranteed me coverage only until two months after his arrival. The Affordable Care Act and the movement sparked by those incredible founding members of Young Invincibles allowed me—for the first time in years—to be seen by a primary care doctor.

I finished my first semester and 2nd trimester with a 3.7 GPA and a spot on the dean’s list. My plan was to keep the ball rolling, I’d have my baby and continue school and work. I had just one problem, childcare. I was initially thrilled to find out that my community college had on-site childcare but yet another setback presented itself when I was told in order to qualify for campus-based childcare I would need to be enrolled in classes full-time. There were simply not enough hours in a day for me to work, go to school, complete school work and be a mother to my son.

I thought about how I wished the “rules” would have been different how I wish they’d considered me. But Young Invincibles knew that Child Care Access Means Parents are in School long before I knew that the “rules” that kept presenting themselves to me as barriers to my future were policies.

Despite the policies that seemed to stand in my way at every turn by 2013 I’d saved up enough money to send my son to daycare and I was back at school. It was like I picked up right where I left off, I got back on the Dean’s list, was inducted into an Honor Society, became the Editor in chief of my school newspaper and became a part of the Young Invincibles family.

It was at this time that I learned that the best way my nation could help me or any student parent was through support for policies that actually stood to support us— on-campus childcare, expanding Pell and access to healthcare— Policies that will not only get students to college but through college.

Through Young Invincibles, I traveled the nation sharing my experiences and the policy barriers that stood in my way with reporters, funders and members of the media. I’d learned to advocate not just for myself but for others and through my newly built YI family I felt empowered.

It was 2016 and graduation was approaching but it wasn’t until I signed up for the ceremony— after I had satisfied nearly all of my degree requirements— that I learned of yet another barrier. I would have to take three additional math classes to meet the requirements for my major.

I would still have to remain in community college for an additional four semesters before earning a degree that should have taken four semesters in total to complete. By the time I got to the last class I was told that I’d exceeded the maximum Pell Grant and would need to pay out of pocket for my last required course.

I was going to school so that I could have a career and be financially stable, yet in doing so, I was actually digging myself into an even deeper financial hole. Before enrolling in college, I was poor and likely to stay poor without having earned a college education. Steps away from my educational goal, I was not only poor, I was in debt.

I had become an expert in the field of barriers to higher education and now was My chance to fulfill the true mission of Young Invincibles– to amplify the voices of young adults in the political process and expand economic opportunity for our generation. I knew we needed policies that were going to help students like me, working as hard as possible every single day to provide for themselves and their families. Without sufficient aid, not only for tuition but all the costs associated with school, too many students could end up in debt and no degree.

Through Young Invincibles my struggle became a call to action that policy had failed to consider the very individuals being directly impacted by these bad policies. It was through Young Invincibles that I was put in the room with organizations and policymakers who wanted to not only understand these barriers but work towards eradicating them.

Last month, I walked across the stage and accepted the degree that had taken me a decade to secure.

As I looked out into the crowd and saw my son, now 9 years old, I thought about his future and how much brighter it will be because of the example set by YI. What we are doing today is building a legacy, so that future generations will have it easier than the ones before.