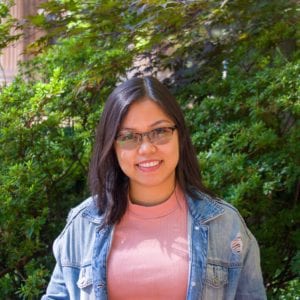 The concept of studying at an Ivy League school never once entered my mind until I went to LaGuardia Community College (LaGCC). As a first-generation, low-income (FGLI) student, the probability of getting into and studying at an elite university is almost non-existent, or at least that’s what I thought back then. It was through CUNY’s Accelerated Study in Associate Programs (ASAP) that I learned that some of the graduates of the program went into many elite schools like Cornell, Columbia, and Stanford. I thought, perhaps, I could also make it.

I wanted to stay in New York, so my choices for senior colleges were narrowed down to only three schools—Columbia University, Baruch College, and New York University. I got accepted into all of them. Like many college students, I did some research and made sure that all these colleges would cover all or most of my tuition. I attended the transfer fair at LaGCC, spoke to many representatives of the colleges, and asked about their school experience.

Many people helped and supported me throughout my transfer process. My LaGCC professors were supportive and encouraging. My adviser from ASAP cheered me on from day one, and the Transfer Office at LaGCC answered any questions that I had, and helped me figure out how I should approach the transfer application from different schools. I graduated at LaGCC with 75 credits. I was able to transfer 60 credits to Columbia — the maximum credits Columbia would accept.

Transferring to Columbia felt like a dream. I was feeling a mix of excitement and apprehension about making it to one of the top schools in the country. Many told me before applying to Columbia that the schoolwork would be cumbersome and nothing like what I experienced in community college.

During my first week in Columbia, the orientation leaders and my adviser warned me to be careful about taking too many classes, especially if I decided to work while going to school. At LaGCC, I was working 45 hours a week and taking 15-21 credits per semester, and was able to graduate with honors. Nonetheless, I heeded my advisor’s recommendation and only worked part-time while going to school full-time at Columbia.

As an FGLI student, sacrificing many working hours not only means choosing to finish school quickly, but also means leaning on federal student loans to help cover non-tuition costs. What I didn’t anticipate upon transferring, however, was that even with the many working hours I sacrificed, I still couldn’t keep up with the coursework. I was always physically and mentally exhausted.

I began attending Columbia in Fall 2018. My first two semesters were difficult partly because of my commuting situation. I’m a work-study student, so during my first semester, I had to take a night shift that ended at 9 pm, so I would get home at 11 pm since I live in College Point, Queens. It saves me more money living far from Columbia. As the head of the household, I never considered living on-campus because of how expensive campus housing is. I considered moving closer, but it’s tricky because my younger siblings live with me as well. Ultimately, my academics suffered because I didn’t have time to study properly. I used to take a nap a lot at the Lerner lounge, as I’d leave my house at 7 am and would go home around 11 pm, every day.

When I was in LaGCC, I never had to worry about those issues as ASAP covered everything that I needed, thus helping me graduate with ease and with flying colors. I was also able to focus on my studies while keeping my job. ASAP not only covered my tuition at LaGuardia, but also provided me with MetroCard, and book vouchers. At Columbia, they only offer limited MetroCards during the change of program period, midterms, and finals.

Since New York State announced its lockdown due to COVID-19, I’m now able to stay home for the first time. I’m not acquainted with my new routine yet, and I don’t experience the commuting issues anymore. However, I hope that after this pandemic is over, Columbia develops a program where they can house students who commute, especially for FGLI commuting students, at least even during midterms and finals week. Or perhaps they could provide a space for students to take a nap — a ‘Commuter’s Lounge’ of some kind.

Paola Cruz is a junior at Columbia University and a member of Young Invincibles’ Spring 2020 New York Young Advocates Program.