Next week the U.S. Senate will vote to begin debate on a plan to repeal the Affordable Care Act. What that plan is, who knows? Even Senate Republicans’ second in command said that “knowing what the Republican healthcare bill will be before a… vote is a ‘luxury we don’t have.’” While that kind of suspense may work for reality TV, it’s not how the United States Senate should approach voting on legislation that will reorder more than one-sixth of America’s economy, and the health and financial security of the American people.

Last month, we published an analysis looking at net premium costs for the typical young person on the individual market under the Senate’s Better Care Reconciliation Act (BCRA). After broad public backlash and a CBO score that found that, under BCRA, 22 million more people would be uninsured within the next decade, Senate Republicans made a few tweaks to their bill in hopes of buying off a few votes.

Our June analysis was right, no tweaks can fix what is a fundamentally broken bill that even Republican Senator Susan Collins has said is in need of a “major overhaul.” Yesterday, the CBO released a score of this revised version of BCRA (or what we are calling BCRA 2.0), and like the original BCRA, it would increase net premium costs for the typical young person on the individual market.

Like the original BCRA, BCRA 2.0 substantially reduces premium tax credits that help Americans afford their health insurance premiums, and which young people on the individual market disproportionately qualify for. That means that the typical young marketplace shopper (who has a median income equal to 140 percent of the Federal Poverty Level) would pay at minimum $553 and as much as $803 more in premiums for a silver plan under BCRA 2.0. But that’s not all, while the typical young person on the individual market can — thanks to the ACA’s subsidies — get a bronze plan at no monthly cost, under the BCRA 2.0, they would have to shell out $396 to $546  a year for a bronze plan. These lower estimates assume CBO’s HSA tax benefits for an individual earning 175 percent of the Federal Poverty Level (presumably overestimating the HSA savings for an individual earning 140 percent FPL), while the upper estimate assumes no HSA benefit whatsoever. 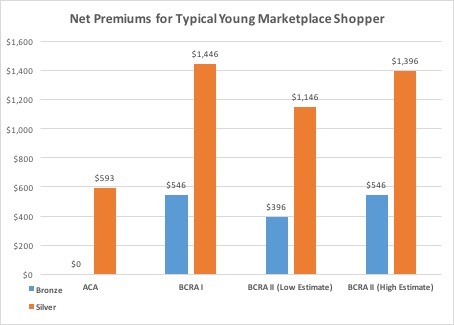 What would the typical young person get for that bronze plan? According to CBO, not much. the average deductible for a bronze plan under the BCRA 2.0 would be $13,000 a year for an individual in the year 2026. That’s $2,100 higher than what CBO projects the annual out-of-pocket maximum under current law to be during the same year.

Senate Republicans have also floated an alternative proposal to repeal most of the ACA with no replacement plan in place. CBO estimates that this plan would increase the number of uninsured by 32 million people and cause premiums to double by 2026. By eliminating premium subsidies entirely, this bill poses serious threats to young people and their ability to afford coverage.

Regardless of which repeal plan comes up for a vote next week, it’s going to ask most young people on the individual market to pay more in premiums for even less in benefits. It’s time for Senate Republicans to abandon their repeal efforts and work with their colleagues across the aisle to figure out solutions that will make it easier, not harder, for young people to afford coverage. 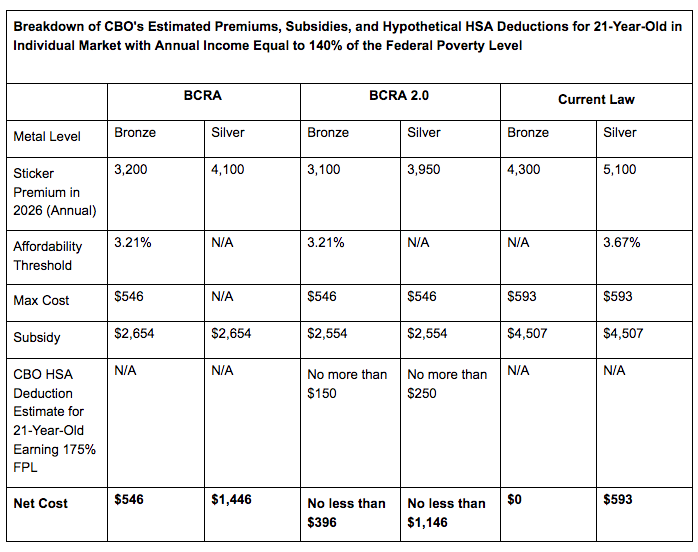