Since the implementation of Medicaid work requirements in Arkansas this past summer, more than 8,400 people ages 30-49 have already lost their Medicaid coverage. Thousands more young adults stand to lose coverage now, as these requirements have just taken effect for folks ages 19-29 years-old as of January 1. According to an analysis by Young Invincibles, young adults – especially young African Americans – will be disproportionately hurt by these onerous and unfair hurdles that the state has added to its Medicaid program, Arkansas Works.

Arkansas Medicaid work requirements are already hurting Arkansas from all walks of life, but the pain will be felt most acutely by the state’s young adults now that the requirements have taken effect for people ages 19-29 this year.

Using U.S. Census data, Young Invincibles estimates that of the 805,500 Medicaid enrollees in Arkansas, around 88,200, or about 11 percent, are between the ages of 19 and 29 years-old. YI previously estimated similar impacts in Kentucky; for more information on our methodology see this post) Around 55,700 young Medicaid enrollees will likely be exempt from work requirements because they are in school, taking care of children, or receiving social security income or dually enrolled in Medicare. That leaves 32,500 young adults who could lose their health care, though some could qualify for other exemptions not modelled here related to pregnancy, medical frailty, substance use disorder, or other qualifying conditions. That’s 37 percent of the young Medicaid population that could lose coverage. Only 16 percent of the Medicaid population overall would be subject to the work requirement, making young adults twice as likely as other Medicaid enrollees to be impacted. Even those who work enough hours could lose their coverage, due to the burden of reporting and verifying their time through the unreliable Arkansas Works online portal. 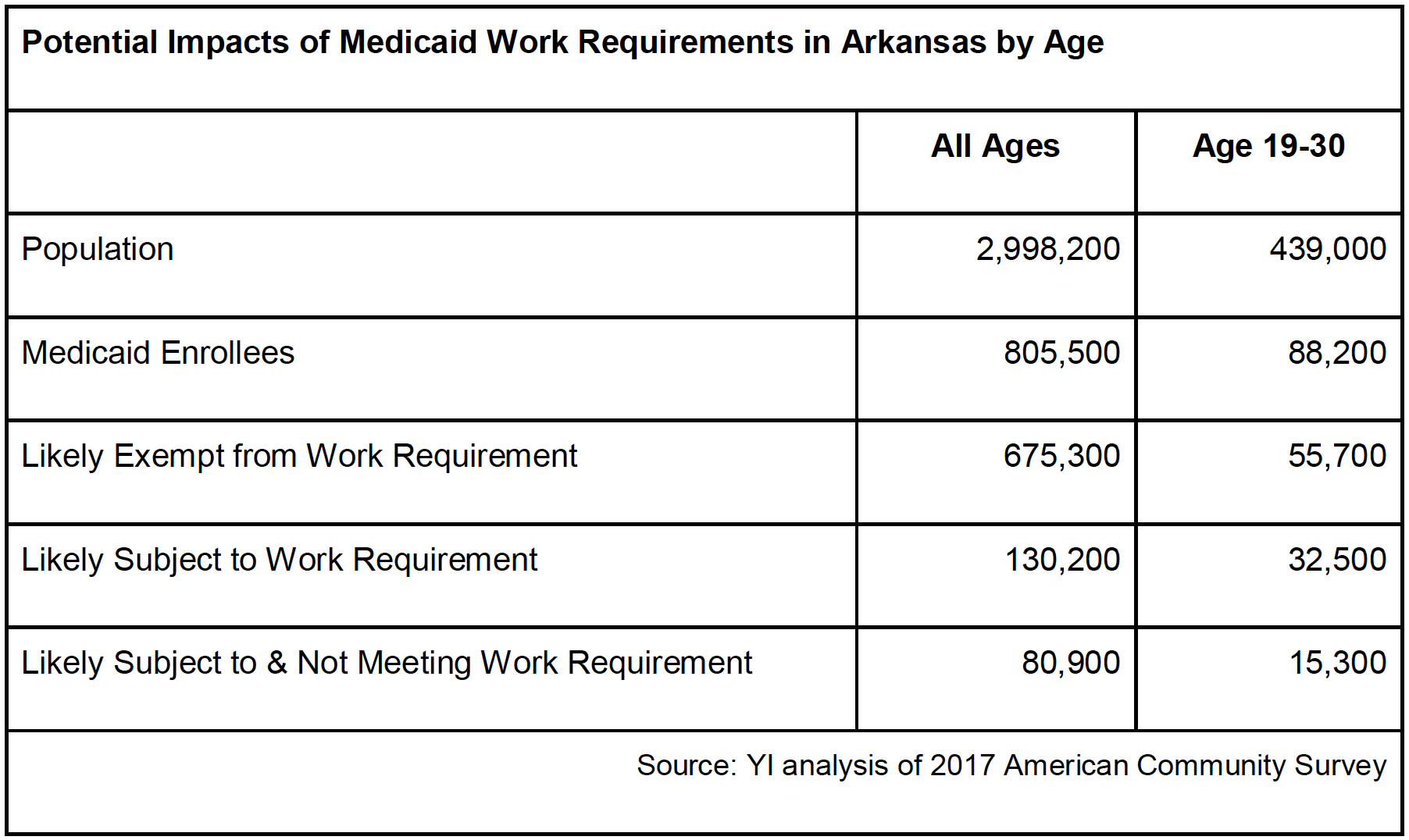 As PBS recently documented, Arkansas workers have been left confused by the online hour-reporting system, which has limited availability and requires that Medicaid recipients have reliable access to the internet. Yet 67 percent of the young adult Medicaid enrollees that will be required to submit monthly proof of their employment online do not have reliable internet in their homes. This threatens not only their ability to keep their health coverage, but also makes job searches and school work incredibly challenging. For young adults who are already struggling to survive on less than $17,000 a year, this could make it impossible to ever climb out of poverty.