Hundreds of thousands of young Floridians are uninsured. Click the fact sheet below to see how the health coverage gap affects them, or download it here.

If you’re interested, check out how many young adults fall into the health coverage gap in other states: 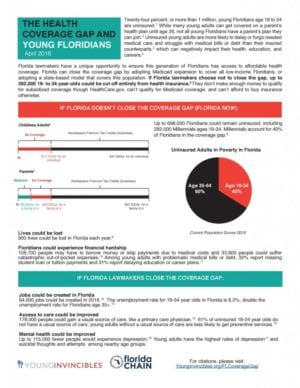 [3] See, e.g., Karen Davis, “Exhibit 3: Uninsured Young Adults Most Likely to Have Cost-Related Access Problems and Medical Bill or Debt Problems in the Past Year,” in A New Era in American Health Care: Realizing the Potential of Reform (Washington, DC: The Commonwealth Fund, 2010), 9, accessed August 11, 2014, http://www.commonwealthfund.org/~/media/files/publications/fund-report/2010/jun/new-era/1419_davis_new_era_american_hlt_care.pdf.

[5] Estimated number of young Floridians who are uninsured, yet would not qualify for tax subsidies through the Marketplace because they fall below 100 percent of the Federal Poverty Level (FPL). Data derived from “CPS Table Creator,” CPS Annual Social and Economic Supplements 2015, US Census Bureau, http://www.census.gov/cps/data/cpstablecreator.html.

[7] Certain individuals under 100 percent FPL, including parents of dependent children below 34 percent of FPL, pregnant women, and children may be eligible for coverage under Florida’s current Medicaid and CHIP programs. “Medicaid Income Eligibility Limits for Adults as a Percent of the Federal Poverty Level,” The Henry J. Kaiser Family Foundation (KFF), accessed December 22, 2015, http://kff.org/health-reform/state-indicator/medicaid-income-eligibility-limits-for-adults-as-a-percent-of-the-federal-poverty-level/. Data based on state-reported eligibility levels as of January 1, 2015.

[8] Estimated number of uninsured Floridians who fall in the Medicaid gap because they earn less than 100 percent of FPL. Ibid.

[17] Depression prevalence estimates for 18- to 25-year-olds exceed those for both 26- to 49-year-olds and people age 50 plus. “Major Depression Among Adults,” National Institute of Mental Health, accessed August 7, 2014, http://www.nimh.nih.gov/statistics/1MDD_ADULT.shtml.