Good Thursday morning, ladies and gents! Grab the popcorn and set the DVR: we’ve got 2 veep announcements on the way, the RNC in Cleveland next week, and the Democrats’ big celebration scheduled just a week later in Philly. Please share this week’s memo, and encourage your colleagues and friends to keep up to date with the latest on all things Millennials and 2016 by signing up for updates here.

MEASURING UP MILLENNIALS: “Just 26 percent of young whites and 49 percent of Hispanics have a positive opinion of the former secretary of state. The first-of-its-kind poll pays special attention to the voices of young adults of color, highlighting how race and ethnicity shape the opinions of the country’s most diverse generation. The survey polled all young adults, not necessarily registered or likely voters, but the findings suggest Clinton may struggle to turn out people 18 to 30 to support her candidacy. The GenForward poll found that among those who preferred Sanders in the primaries, only half are prepared to say they’ll back Clinton in her general election face-off with presumptive Republican nominee Donald Trump. About a quarter say they won’t support Clinton, and nearly a quarter say they’re not sure. Clinton has made moves in recent days to attract some of Sanders’ loyal young supporters, including unveiling a college affordability plan that would make in-state tuition free for families making $125,000 or less per year. Clinton spokeswoman Xochitl Hinojosa said the candidate ‘believes we must do everything we can to make sure that millennial voters have their voice heard in our campaign.’” (Associated Press, July 12, 2016)

SIREN: “Clinton’s campaign may not simply be able to count on young voters seeing her as the lesser of two evils in a race against Trump. Seven in 10 young voters — including majorities of blacks, whites, Asians and Hispanics — say they are unsatisfied with the race between Clinton and Trump and want the option of a third party candidate.” (Associated Press, July 12, 2016)

SANDERS’ CLINTON ENDORSEMENT MAY SWAY MILLENNIAL VOTERS: “The lingering chasm between presumptive Democratic presidential nominee Hillary Clinton and her chief primary rival was bridged Tuesday, with Sen. Bernie Sanders teaming up with Clinton at a campaign event, where he formally endorsed Clinton’s bid for the White House. Clinton’s appearance alongside Sanders could do a lot to assuage his supporters who may remain on the fence about supporting her candidacy, especially among young voters. Democrats head to their party convention in Philadelphia, where Clinton will be formally nominated later this month.” (NPR, June 12, 2016)

JOHNSON SAYS HE WOULD LOOK AT LOWERING INTEREST RATES ON STUDENT LOANS: In an interview with Politico’s Glenn Thrush last month, Libertarian party presidential nominee Gary Johnson said of Sanders: “Well, what he’s right about is that students have been sold a bill of goods, so as president of the United States, at the end of the day, I get to either sign or veto legislation that Congress sends me, I would really take a hard look at how students might, I don’t know, receive some sort of benefit or reduced interest rate. I mean, if we can–if the Federal Reserve can bail out all the big banks, it seems to me that we might arrange lower interest rates for these loans to get paid back.”

WHO IS CURRENTLY GRADUATING DEBT-FREE?: A new report out from Demos analyzes demographic trends for exactly who is and who is not graduating with student debt. The results are alarming. Check it out here.

28 PERCENT OF STUDENT DEBTORS DO NOT COMPLETE THEIR EDUCATIONAL PROGRAMS: “About 28% of Americans with student debt didn’t complete the educational program for which they took on the loans, according to the 2016 National Financial Capability Study published Tuesday by the Financial Industry Regulatory Authority. The study adds to the growing body of evidence that the borrowers who struggle the most with student loan debt aren’t necessarily those with the largest balances. Instead, borrowers who don’t complete their degrees often find it challenging to repay their loans — even if they’re relatively small — likely because they didn’t earn the credential that would give them an earnings boost in the labor market… More than half of the borrowers who didn’t finish their schooling said they were late at least once on a student loan payment, compared with 38% of borrowers who did finish their education, Finra found. Roughly two-thirds of borrowers who had that experience said they would change the way they approached borrowing if given the chance to do it again, compared with 54% of borrowers who finished school. Americans earning $25,000 or less were also more likely to report borrowing without completing than their wealthier counterparts.” (Marketwatch, July 12, 2016)

PCCC SAYS MORE SENATE CANDIDATES HAVE JOINED CALL FOR DEBT-FREE COLLEGE: “Senator Bernie Sanders has at last enthusiastically endorsed Hillary Clinton. Now Democratic Senate candidates are rallying around the push to ease college debt that Mrs. Clinton embraced last week to show Sanders supporters that she had adopted some of his political and policy ideals. The Progressive Change Campaign Committee says that multiple candidates in top-tier Senate races are jointly endorsing the debt-free concept, which could eventually provide free in-state tuition to eligible students. The move suggests that the program to try to ease student debt is going to be a central element of the national Democratic argument for a Senate majority. ‘We have to fight to ensure that graduates of public colleges and universities are able to begin their career without this growing burden,’ said Patty Judge, the Democratic opponent to Senator Charles E. Grassley, Republican of Iowa. Other Democratic Senate contenders now backing the approach, according to the progressive organization, include Russ Feingold in Wisconsin; Kamala Harris in California; Gov. Maggie Hassan of New Hampshire, who is seeking a Senate seat; and Deborah Ross in North Carolina. Senators Ron Wyden of Oregon and Michael Bennet of Colorado, who are both seeking re-election, have also lent their support.” (The New York Times, 7/13/2016) 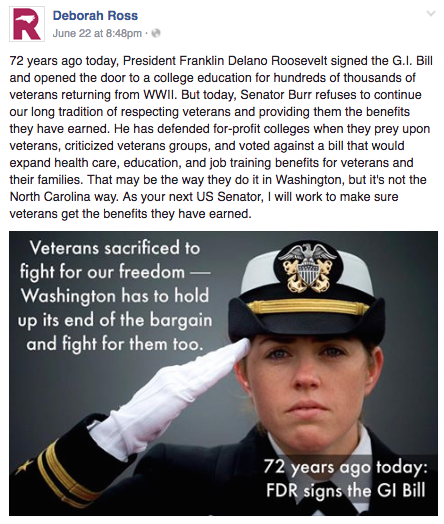 CALIFORNIA–SANCHEZ RECALLS PERSONAL EXPERIENCE IN ROUNDTABLE WITH COLLEGE STUDENTS: “Rep. Loretta Sanchez (D-Orange) was back in California on Tuesday, holding a roundtable discussion with recent graduates and other people to discuss education policy. Sanchez noted that she relied on federal and state education grants when she attended college, and was enrolled as a toddler in the early childhood education program Head Start. Sanchez listened as recent graduates, a fifth-grade teacher and a grandfather of 13 shared their concerns about the cost of education. Sanchez touted college affordability proposals she’s supported, including one to nearly double the amount of Pell grants available and another that would allow students to refinance student debt at lower interest rates. ‘Back in Washington, you’re dealing in the millions and the billions…so my colleagues, they don’t see that $30,000, that’s a big amount,’ Sanchez told the group.” (LA Times, June 30, 2016)