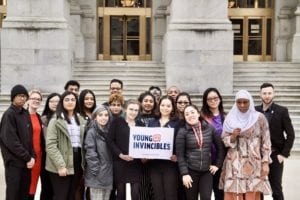 On June 30, New York City Mayor Bill de Blasio and the New York City Council voted on an $88-billion city budget for Fiscal Year 2021 (FY21). The budget — which is $7 billion less than the budget the Mayor proposed in January — passed in the midst of an ongoing pandemic, an economic crisis, and continued protests over police brutalizing Black and Brown people with impunity.

As New York City residents face rising unemployment, hunger, and housing insecurity, hundreds of thousands of New Yorkers urged city leaders to cut at least $1 billion from the New York Police Department’s budget, and reinvest it in youth programs, education, and housing. While the passed budget did reduce spending for the NYPD, ultimately it did not divest nearly as much from the NYPD’s budget as advocates urged.

With more young people engaged in this budget process than we’ve ever seen, Young Invincibles took a closer look to see how New York City’s next generation is supported in the City’s budget. Below are a few takeaways from the FY21 budget:

Paola Cruz, a Columbia University student and an ASAP alum from LaGuardia Community College, shared her thoughts on the fight to restore ASAP:

“As New York City faces a real economic downturn, our city’s leaders should know that reducing programs like ASAP means making it harder for students like me to succeed. With everything that is happening right now, any possible threat to education, such as cuts on funding, would only be discriminatory to schools and students’ overall academic careers.”