Medicaid work requirements threaten to deepen existing health care disparities in a number of ways. For example, people of color – including young adults – already experience poorer health care access and lower quality care than white Americans. In Kentucky, our analysis shows that African Americans make up 10 percent of the young adult population, but account for 14 percent of the young adults who could lose Medicaid coverage.

The same is true for Medicaid enrollees in rural communities. According to the Center on Budget and Policy Priorities, about 1 in 5 Americans live in rural communities, including millions of young adults. Folks living in rural communities are already facing huge challenges when it comes to access to health care. Higher unemployment rates, lower household incomes and lower rates of employer-sponsored health plans coupled with the rapid closure of rural hospitals and health centers are creating widening health disparities and a greater need for Medicaid coverage. Indeed, young adults living in non-metro areas are more likely to be unemployed and rely on Medicaid than those in metro areas (Table 1). 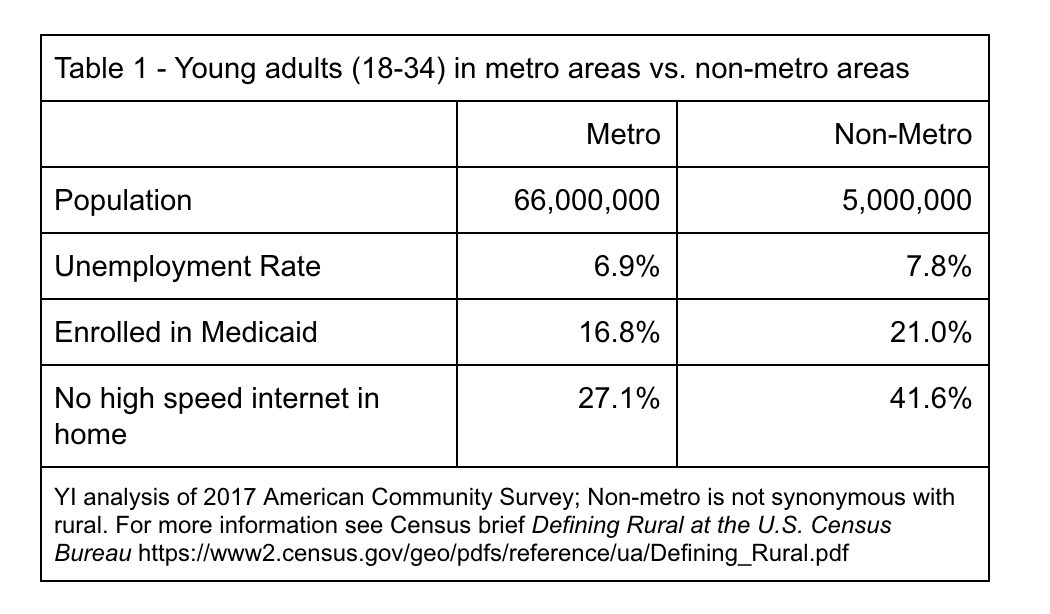 Yet at the same time, many states with huge rural populations are attempting to institute “work requirements” that force many Medicaid recipients to submit proof of employment every month in order to keep their health care. Take Arkansas, for example – a state with a 42% rural population. Starting in January, these new arbitrary rules could mean that thousands of young adults between the ages of 18-30 stand to lose their “Arkansas Works” health coverage. Why? It won’t be because they’re unemployed. In fact, most of them work. Instead, it may be because they don’t have access to the internet. Indeed, 42 percent of young adults living in non-metro areas lack high speed internet in the home, compared to only 27 percent for young adults in metro areas.

In Arkansas, the monthly Medicaid verification process must be completed through a buggy and confusing online portal. This presents a huge challenge for residents in rural areas, because they tend to have lower levels of internet access and inconsistent and slower data speeds. In fact, Arkansas ranks 48th in the United States in terms of internet access.

Arkansas isn’t alone. In Kentucky, another state attempting to enact work requirements, more than half of the young adults that stand to lose health care don’t have high-speed internet in their homes. A lack of high speed internet not only hampers the ability to fill out these complicated online forms – it impedes the job searches and school work that are necessary to fulfill these work requirements.

We saw tremendous gains for health care access in rural communities in states that expanded Medicaid under the Affordable Care Act. Let’s fight to build on this progress rather than dragging folks backwards.