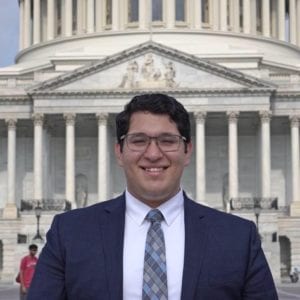 My story is not unique. In many ways, my story is analogous to the stories of hundreds of thousands of immigrants—we move to the U.S. for better opportunities in terms of living, education, and achievement potential. That single phrase that gets called the “American Dream,” but does not show the true adversity faced by the families, and at times young children, as they make their way here and try to survive.

My mother was forced into early retirement from her electronics company after 9/11. Her husband, my stepfather, had traveled to the U.S. multiple times both legally and illegally to work in construction. He would often describe the abundance of employment opportunities for women in the hospitality industry and for men in construction. My mother, with nowhere else to turn, packed as much as she could into several suitcases and kissed her house goodbye, one that she had worked diligently to obtain by herself, in Matamoros, Tamaulipas.

On that day in 2004, I remember looking out my window in a hot July summer at seven years-old and feeling perplexed. I didn’t quite understand the gravity of the decision. I only understood that it might be the last time that I would see my aunts and cousins, people that would eventually fade to the background and become names without any emotional connection.

Our first stop was Brownsville, TX. I remember being in awe at the sights. I had not traveled outside Tamaulipas before. We spent the day touring Brownsville before arriving at a Greyhound station and making our way to my future hometown, Houston, TX. Words cannot describe the culture shock that I felt seeing the beautiful buildings that lined up Houston as our bus made its way downtown. It was breathtaking. Everything seemed that it would be okay.

After we arrived in Houston, we made our way to the southwest, an area off Hillcroft Street and 59. We settled in my stepfather’s one bedroom apartment with a flimsy mattress and a strong cigarette smell. My older brother and I were enrolled at a local school, Benavidez Elementary, while my two-year old brother was taken care of by a local señora. I was supposed to have been entering the third grade, but the school administrators were concerned with my failing grades from the school I had attended in Mexico—a school composed of cement classrooms without AC and dirt patios in which children would play soccer with plastic bottles. A last minute decision was made and I was put in an all-Spanish third grade class. My older brother was placed in fourth grade.

The ensuing years were… complicated. My mother did manage to find jobs in local hotels that would pay her minimum wage, if not lower. Slowly, I upgraded to English as a Second Language classes. However, my stepfather, who had a history of drug and alcohol abuse, became more and more violent and erratic. An exhausting routine began to take shape—he would hurt my mother, she would tell my older brother and I to call the cops, she would give a false name, and my stepfather would be out in a day or two to continue the toxic cycle. Because my stepfather paid the majority of the bills and was the only family we had in the U.S., my mother feared that if she gave his real name he would be deported, leaving us without any support.

It was not until a few years later that my mother grew enough confidence to finally provide the police with my stepfather’s real name. Therefore, he was jailed, and subsequently deported. That freedom was short lived as she began to invite other abusive men into our lives. In 2009, the cycle appeared once again. The beating, the cops, the fake name. But this time was different. Somehow the man was jailed, and subsequently deported as well. Shortly after, my mother discovered that she was pregnant.

Since the hospitality industry is incredibly strenuous, particularly for undocumented folks, my mother was unable to work. We were evicted, but before our apartment was shut, we unlocked some windows in order to sneak in and sleep on top of a blanket at night. My mother had applied for a Salvation Army shelter. Unfortunately, it took a few months before they eventually accepted us.

In the fall of 2009, I was an eight grade student, still in ESL. We discovered a downtown church, South Main Baptist Church, that took us in and assisted us. For the first time I felt as if I had an extended family. My church molded me in more ways that I can describe. From teaching us to speak fluent English, to proper dining etiquette, they took us in as one of their own. They taught us values based on mutual respect and love for one’s neighbor. It was also then that my identity as an undocumented individual became clearer. I saw my fellow youth ministry friends travel on mission trips to Peru. I saw them learning how to drive and eventually driving their own cars. I saw them getting on airplanes for their family vacations. To some degree, I understood my situation. My mother had made sure that my brothers and I understood that we did not have the same opportunities as others. But I did not realize how drastic those differences were.

Once I began high school, the reality of being undocumented fully materialized. I began to look at merit-based scholarships that were available for non-citizens. By my senior year of high school, I had secured scholarships to two universities, one of them was private. However, I was reminded that I had financial responsibilities. Balancing the financial responsibilities of a family while attending college was not going to be an easy feat. They suggested that I attend community college instead. I was discouraged since I had worked so hard to enroll in AP and Honors classes.

In the second semester of my senior year, I was finally able to obtain DACA. It took a long time to gather all the required information since my family had moved frequently. One of the requirements for obtaining DACA was that you needed to continuously reside in the U.S. and be able to prove it. By the end of my first DACA application, I had an entire binder with supporting documentation. The day after receiving DACA, I had a part-time job. I felt a huge sense of pride to be able to help my family financially. I still remember the thrill of sitting at an overcrowded DPS office waiting to take a picture for my Texas ID. I remember the overwhelming feeling of buying my first car, a 2008 PT Cruiser.

After my first year of college, I was admitted to the Honors College at Houston Community College (HCC). Part of the honors program is a study abroad opportunity. My class was set to travel to Italy. Unfortunately, my advance parole was delayed and it arrived two days after my colleagues had left. Although I was unable to travel with them, a passion for cultures and politics was founded.

As my graduation from HCC neared, I found myself in the same situation that I did when I graduated from high school. I knew for a fact that I wanted to obtain a bachelor’s degree. However, I had to keep up with my familial responsibilities. Since I was not a citizen, I could not obtain federal loans to pay for college. Although Texas allows non-citizens to obtain in-state tuition, state universities did not have sufficient merit-based financial aid and were overall more competitive for low-income students like myself. Thankfully, the University of St. Thomas-Houston offered a substantial financial aid package that covered tuition.

DACA allowed me to continue to work so that I was financially supporting my family while also obtaining a college education. This juggling act was one of the most difficult things that I have done, but also one that I forced myself to not second guess or doubt. I convinced myself to look at my situation as a challenge, rather than a disadvantage. This translated to being a full-time student (sometimes taking 12+ credit hours) while working 30+ hours and staying involved in extracurricular activities. Needless to say, I burned myself out consistently.

In May 2020, my family drove in a car parade as my professors cheered me on and congratulated me for graduating. I still have to pinch myself every now and then to make sure that it is done—after six years I was able to graduate.

Today I find myself studying for the LSAT in order to apply to law school in the fall. I am in awe at the things that my family and I have been able to accomplish. This wouldn’t have been possible without the protections of DACA. This program is nothing short of the embodiment of the American dream. This program has allowed thousands of students to obtain a postsecondary education. It has allowed families to prosper and give back to their communities. More importantly, DACA has allowed many of us to not live in fear of deportation.

For my family and I, DACA allowed us to not only experience the American dream, but also American life. DACA allowed my siblings and I to be normal young adults with endless possibilities to accomplish our fullest potential.

There is a saying in Spanish that goes, “Ni de aquí ni de allá,” neither from here nor from there. It is a saying that a lot of DACA recipients and undocumented individuals can relate to. I grew up learning about American history, culture, and eating Texas BBQ. I am, for all intents and purposes, a Mexican-American. Therefore, it should go without saying that DACA recipients need to be provided with a pathway to citizenship.

Today’s decision is a huge relief for myself and everyone with DACA status. We can live another day with the tenuous protections that DACA provides. But we can’t keep living with the uncertainty that our lives remain subjected to the whims of the current administration and the courts. We need a permanent solution. We can accomplish that by passing the DREAM Act. The passage of the DREAM Act is much more than obtaining a legal status, it also represents acceptance into a community that we have long been a part of and have worked diligently to improve.

Josue Rodriguez is a member of Young Invincibles’ National Youth Advisory Board and a graduate of University of St. Thomas in Houston, Texas.