By Kenny Cohen, a Journeyman with IBEW Local 3 in Westchester, New York. 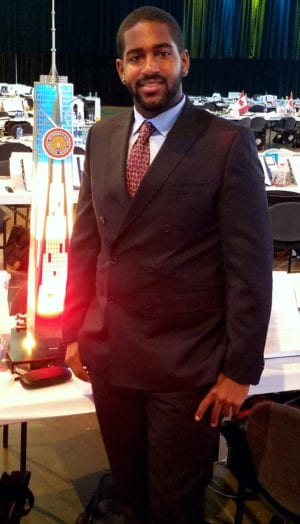 er 1, 2009 I began a journey that would transform my life forever.  As I rode the F train on that sunny morning

in New York City, with my brand-new tool bag tucked between a brand new pair of Red Wing work boots, I reflected on what had led me to that moment in time.

As kids, we fantasize about what we want to be when we grow up. At one point or another we may want to be professional athletes, entertainers, or several other professions that require unbelievable amounts of talent or privilege that we may or may not possess. Later, in school, we are taught about the importance of college and the many career options that higher education will bring you.  We learn about schools like Harvard, Yale, Howard University and Morgan State, but we don’t necessarily learn about other successful paths to high-earning careers, like apprenticeship programs and the opportunity to learn a trade as part of a union.  We learn about great careers in medicine, law, finance, and education, but we don’t learn about being union electricians, steamfitters, or carpenters – they don’t tell us about all the other ways to be successful in our diverse workforce.  I remember feeling that the only way to unlock my potential was to attend a well-known college and seek out a job in one of these highly sought after careers.  Society had encouraged me to think that a traditional college experience was the only way to succeed.

That’s why it was a huge step to find the alternative to everything I was taught. As I sat on the train traveling to my first day of an apprenticeship, I was nervous but excited. It wasn’t the traditional path, so I wasn’t sure what success would look like, but given the staggeringly high youth unemployment in our state, I was determined. In New York, 15 percent of 16-to-24-year-olds (a group that I fall into) are unemployed, and it isn’t because of a lack of motivation or interest in success. It’s due to a lack of resources and opportunities that offer living wages while teaching a marketable skill.  I had no prior experience, but like many young people in my city, I was willing to learn.

I was immediately welcomed into the electrical world by a room full of skilled professionals, called journeymen in our trade, ready to teach me and excited to see a fresh apprentice entering the business. I learned quickly that this was a real solution to my own and my community’s problem with unemployment and underemployment. Throughout my apprenticeship, I was taught by the men and women of our labor union, called the International Brotherhood of Electrical Workers (IBEW) Local 3, with professionalism, patience, skill, and an occasional prank, which equals love in this line of work.  Over the next five and a half years I learned to become a Local 3 journeyman and now it has become my turn to help guide the careers of apprentices that may have had the same apprehension I had coming into a union trade.

No matter where in the country I decide to live, I have confidently learned a skill that is useful and in demand. I have the opportunity to work throughout the United States and other countries. I earn a great living doing what I love, beside workers who have become my second family. I have seen my peers, who I call brothers and sisters in the union take initiative and grow within the structure of our organization to become foremen, project managers, superintendents, and shop stewards. These careers have offered enough economic stability for some of my brothers and sisters to begin businesses of their own, both within the electrical industry and supporting other interests.  The question I always ask myself is, “why aren’t opportunities for apprenticeships in trade unions or other careers in the labor movement discussed more in schools and underserved communities?”

I wish I realized the power apprenticeships have to enhance the economic circumstances for an individual when I was working with New York City youth prior to entering Local 3. A lot of my brothers and sisters from the union come from underserved communities where resources were limited and the people who tried to make a difference were just as limited. A paid apprenticeship is a credential recognized by the industry that provides on-the-job-training while typically providing health insurance and a retirement plan. I experience consistent raises based off my completion of work and class hours. A person is offered this opportunity to succeed without any bias of race, gender, religion or sexual orientation. Along with all of this, Local 3 is unique in the sense that they enroll all their apprentices in the Harry Van Arsdale School of Labor Studies at SUNY Empire State College, so we receive an Associate’s Degree in Labor Relations.  Upon the completion of apprenticeship programs, an apprentice becomes a skilled journeyperson with the ability to perform the tasks of their trade and a college degree.

Young people from underserved communities are already at a disadvantage. We’re facing crisis-level unemployment and we need a range of solutions. My apprenticeship changed my life, and New York’s lawmakers need to invest in this option as a solution. When young people are not informed of the opportunities to join union trades and enter apprenticeship programs, they are being stripped of that career option that could be life-changing for themselves and their families.  I hope to see more young people from these communities with their brand-new tool bags, tucked between their brand-new Red Wings riding the subway excited, knowing they are getting ready to embark on a journey that will completely change their life.